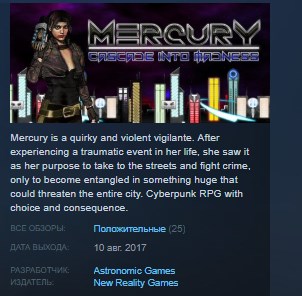 Mercury is a quirky, unpredictable, and a violent vigilante who seeks to bring justice upon a variety of low-life scum in the city.
General Features:

An urban sci-fi cyberpunk setting, taking place in a crime-ridden city where vigilante justice is a common occurrence.
Choice and consequence. The choices you make will have an impact on the world around you.
Similar skill progression system to City of Chains – gain skill points by completing tasks and making progress in the story.
Use a variety of ways to tackle the challenges, be it stealth, charisma, lockpicking, or head-on combat.
Weapon Charge combat system – no more worrying about ammo! Use basic weapon skills to charge it up, then unleash these charges with stronger attacks.
2 difficulty modes – Normal and Challenging.

Mercury is a quirky, unpredictable, and a violent vigilante who seeks to bring justice upon a variety of low-life scum in the city. However, she used to be a normal person with a normal life, a smart young woman with ambitions. One night changed it all. A traumatic experience sent her mind tumbling down into a spiral of madness. Haunted by nightmares and struggling to trust others, Mercury saw a new meaning in her life.

Driven by her newfound purpose, Mercury took to the streets to punish those who are responsible for what happened to her, so that an experience like this won’t happen to anyone else. However, before long, she finds herself entangled in something much bigger than her own sense of revenge. She soon discovers that petty criminals are only a tip of the iceberg and that the city contains individuals who are far worse. In order to bring down the enemy, she will have to find potential allies, make hard decisions, manipulate others when necessary, and use unhinged violence in order to keep herself safe through all this.

You are Mercury. Whether she becomes an agent of justice or a ruthless killer is in your hands.

You can check out Astromic Games´ popular RPG titles on Steam here: http://store.steampowered.com/bundle/347/

If you want to support this game and all my other past and future games further, please check out my patreon page below!
https://www.patreon.com/matthewashworth